Burglary- how much force can I use to defend my family and home?

How much force can I use?

There has been a lot of press over the last few years around how much force you can use if a burglary enters your home.

Anyone remember the film- Home Alone? 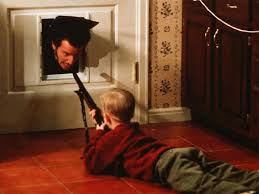 One of the most publicised cases was that of Tony Martin. Back in 1999 Tony was a Farmer who lived alone in his farm in Norfolk. He claims he had been burgled a number of the times and reports to have been frustrated over the lack of response from the Police. He illegally owned a pump action shot gun. In August of 1999 two burglars broke in to Mr Martin’s house and shooting in the darkness Mr Martin fired 3 times. One of the burglars was hit fatally in the back and both sustained wounds to their legs. The offender shot fatally was a 16 year old youth who had a lengthy criminal record having been arrested 29 times and at the time was on bail after being accused of stealing garden furniture.

Mr Martin was originally convicted of murder and this sentence was later reduced to Manslaughter.

So… what are the laws around defending your property?

The government states: You can use reasonable force to protect yourself or others if a crime is taking place inside your home.

This means you can:

There’s no specific definition of ‘reasonable force’ – it depends on the circumstances. If you only did what you honestly thought was necessary at the time, this would provide strong evidence that you acted within the law.

The Crown Prosecution states that you can use force that is considered reasonable- but what may be reasonable to one may not be to another. It states that you can defend yourself in your own property. The law does not require you to wait to be attacked before defending yourself. However, once the offenders have left your property you cannot pursue them as this would no longer be classed as self-defense.

Avoid ever being in this situation by ensuring your home is properly secured. Call us for a FREE Safety and Security Audit of your property with hints and tips on how you can improve your home security without spending any money! 01908 483233